NCEA level 3 Painting Folio for 2014 by neon999 on DeviantArt

My NCEA board for painting. NCEA level 3 Painting Folio for 2014

Sarah Auckram, Bayfield High School Scholarship - 'The Consumption of Beauty' I used the artist Tjalf Sparnaay as the initial inspiration for my first panel of work, which then developed in the second panel to a more defined theme. At first it started as a study of painting realistic food. I then saw how some food is often portrayed as glamorous in the media, such as with McDonalds. However, this food is known to be unhealthy.

Freya Milner, Wellington East Girls' College Scholarship - 'Elemental' Initially my work was about exploring the relationship between people and landscape, and eventually that became more about the power struggle between the two, focused on the elements and man. I also wanted my work to have a filmic quality to it, even if I didn’t use film as a medium. My work became a narrative about the relationship people have with the environment, captured in moments, like film stills. 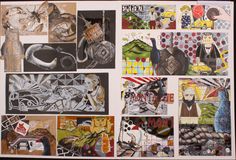 A Level Art Coursework: help for A2 Art students

This article contains help, ideas and guidance for CIE A2 Art & Design students who are working on their A Level Art Coursework projects.

Liam Hoffman, James Hargest College Outstanding Scholarship - 'Godspeed You! Dying World' There is an overall environmental theme to the board, but I wanted to take that and blow it out of proportion, so my aim was to start simple and then intensify it into a bizarre, twisted conclusion. This is seen via the duck and egg analogy at the start, which results in a mutated, tendril-tastic finish in the third panel. 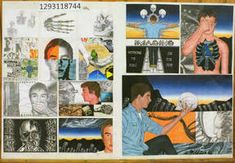 Level 3 Folio by Mezcat on DeviantArt

This was my 3 board folio which was entered for NCEA Level 3 Art (Painting). My 4 main themes are women, birds, wallpaper patterns and flowers which i h... Level 3 Folio